A preposition is a word that shows the relationship between two nearby words. Put another way, a preposition links two words to express how they relate to each other. For example:

Examples of prepositions that tell us where:

Examples of prepositions that tell us when:

Not all prepositions tell us where or when things are. Prepositions have other roles too. For example, they might show possession (e.g., collar of the dog) or purpose (e.g., a tool for digging). We will discuss this later.

It's your go! Select the preposition in the following sentences.

More Examples of Prepositions that Tell Us Where

Here are some more examples of prepositions that tell us where something is in relation to something else (prepositions highlighted):

A Good Way to Think about Prepositions

This works because lots of prepositions show the relationship between two words by expressing their locations relative to each other.

More Examples of Prepositions that Tell Us When

Here are some more examples of prepositions that tell us when something is in relation to something else:

About the Word "Preposition"

The word "preposition" means "positioned before." A preposition sits before a word (either a noun or a pronoun) to show that word's relationship to another nearby word. Look at these examples:

Expressing where and when are two key roles for prepositions, but they have other roles too. For example, they might show possession or purpose.

In the examples below, each preposition (highlighted) sits before the noun "the wizard" to show us the relationship between "the wizard" and "the book." Here are some more examples:

Object of a Preposition 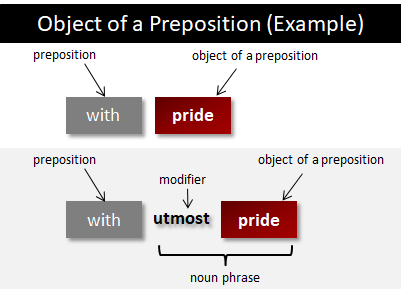 Read more about the object of a preposition.

Here is a 9-minute video summarizing this lesson on prepositions.

Here's a drag-and-drop test on prepositions.

Why Prepositions Are Important

(Issue 1) Do not capitalize prepositions in a title.

As a rule, a preposition in a title is not capitalized unless it is the first word.

("In" is capitalized because it is the first word.)

This convention for writing titles is called title case. In title case, articles ("a," "an," "the") and conjunctions (e.g., "and," "or," "but") are not capitalized either. Read more about title case.

(Issue 2) Don't use the wrong case after a preposition.

Another one that catches people out is using "who" after a preposition. "Who" becomes "whom" in the objective case. In other words, "who" is to "whom" as "he" is to "him" or "they" is to "them." The bottom line is "who" cannot be the object of a preposition. You need "whom.")

(Write "whom" after a preposition.)

(Issue 4) Try to avoid ending a sentence in a preposition.

What percentage of people think you can't end a sentence with a preposition?

Have a look at our poll. It tells us the percentage of people who still think you can't end a sentence with a preposition.

Lots of people think it is incorrect to end a sentence in a preposition because, as we've just covered, a preposition is supposed to sit before a noun. (It is, after all, how preposition gets its name.) Therefore, if the preposition is the last word in the sentence, it can't sit before anything. So, there is some logic to this ruling, which many people follow. However, this issue is far more complicated than many realize, and the best way to summarize it is by saying that, in the overwhelming majority of cases, it's perfectly acceptable - from a grammatical perspective - to end a sentence in a "preposition." (I'll explain the quotation marks later.)

Here's the rub. Even though you'd likely be correct by ending your sentence with a "preposition," you should be mindful that a fair few of your readers will think it's a grammar mistake or sloppy writing. As we still haven't trained ourselves to ignore this so-called ruling, we can't ignore it. I like to think of "avoiding a preposition at the end of a sentence" as a game rather than a ruling. Let's look at an example:

(This is natural sounding, but it ends in a preposition.)

(This sounds awful. It's unnatural and contrived. On the plus side, our preposition now sits before the pronoun "which," and that fits the rule for siting a preposition.)

But, it sounds terrible, so let's keep playing. Let's reword our sentence:

(Yes! This sounds natural, and it does not end in a preposition. This keeps everyone happy...except those people who think we shouldn't pander to those who still think you can't end a sentence in a preposition.)

So, for now, I'm advising you to follow this non-ruling. However, if restructuring your sentence makes it sound contrived and you can't reword it, then leave the preposition at the end. If you're questioned on it, fight like a dog because you'll be in the right.

So, why was "preposition" in quotation marks earlier in this section? Well, quite often, your sentence will end in something that looks like a preposition but isn't. Be mindful that it could be part of a phrasal verb, i.e., a verb made up of a verb and another word (either a preposition or a particle), e.g., "fill in," "stick to," "catch up," "catch out." Quite often, these words must be next to each other, and that's often a factor in your sentence structure.

(This is sloppy, but it's not technically wrong.) (This is much sharper.)

Some phrasal verbs (i.e., multi-word verbs) have prepositions that do not add anything. When you encounter one of these, delete the prepositions to improve succinctness.

(This is correct, but it's not succinct.) (This is sharper. The prepositions were a waste of ink.)

Target
Games for Learning Prepositions Here are three games for learning about prepositions: